Last June, the reality of the Mr. Pete Foundation was just getting started. June turned to July which turned to October and we were overwhelmed with the giving of the greater community. Fast forward eight months. We have opened the grant application process and are receiving requests from teachers and schools who want to carry on the legacy of Mr. Peterson.
We are very excited to announce the very first recipient of a Mr. Pete Foundation Grant. Molly (Johnson) Pavleck was a student of Mr. Peterson’s in 1988. She was able to experience the passion, expertise, and excitement of the classroom. And today, Molly is a kindergarten teacher in the same school where she was a student just a short time ago, carrying on the same values as Mr. Peterson had in his classroom.
Molly applied for a Mr. Pete Grant on behalf of the entire kindergarten class at Falls Elementary School. The four classrooms will engage in a series of art lessons with local artist The Canvas Butcher. At the culmination of the lessons, the students will hold an art show to display their hard work.
We are so excited that this group of students will get to carry on the passion for individuality, creativity, and fun that Mr. Peterson emphasized in his classroom. Look for more on this project as well as other grantees shortly!
Congratulations Molly and the entire kindergarten class at FES! 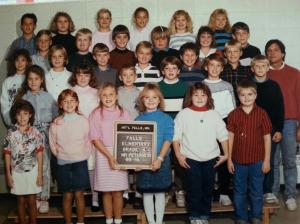 It has been just a little over a month since we officially launched the Mr. Pete Foundation. Like Gina said in her last post, the response has been overwhelming and so much greater than we could have ever imagined. We’re preparing the final details on a couple of exciting things coming up, and we’re excited to get going on the next phase – living the mission of the foundation.

Last night I was thinking about the path that led us to this point. I am a true believer in signs and have had an incredible number of large and small ones on this journey. Signs that let me to know that we are doing the right thing and that we are making something sustainable that will help so, so many along with recognize someone who has impacted more people than he will ever know.

The first real “sign” or that sparked this was the day I saw Gina at our daughters’ kindergarten round-up. In a school where people have to go out of their way to enroll, it’s pretty amazing that they ended up in the same place. And they not only became classmates, but best friends. Those girls brought us back together, and for that I am grateful.

On the day we launched this project, we went to my back yard to celebrate. As we were talking, I looked down and plucked a four-leaf clover from the ground. This I took as a sign that we are on the right track. I plan for that piece of grass to be our symbol of luck throughout this entire process.

A year or two ago, I scoured YouTube for the rendition of Chicken Fat that we had listened to almost every day of fourth grade. I finally found it, but it was a chore! Just a couple of days after launching the foundation, I heard a familiar sound on the tv. Chicken Fat, a song that had only existed in my head for years and years, was actually coming through the speakers during an iPhone commercial! The odds of this very song running on a frequent commercial is such a fun, heartwarming, and strong sign of what is to come.

Finally, I know it is more irony than a sign, but so many of my favorite people happen to be newly teaching 4th grade this year. Against all odds, at least three people have brand new 4th grade teaching assignments, opening the door to allow them to impact others in the exact same way that I was so long ago. I am so proud of these people and looking forward to hearing about the lives they are changing.

I realize that I sound like a dreamer in this post, but the energy and hopefulness that has come with this foundation has made me stop and smell the roses. The path is leading us to greatness. I’m glad you’re along for the ride!

25 years ago, my life was beginning to be shaped in a way I could never even imagine. I tell everyone that 4th grade is the only full year of elementary school I remember. During this year, I was placed in one of the most innovative classrooms with an extremely foresightful teacher, Mr. Peterson. I had no idea that he was “innovative” at the time, nor did I know that I was learning true life lessons. All I knew was that I was having fun, doing things I hadn’t ever done before, and getting really fast at math. I got to know my classmates better through writing plays, through our time spent around the sink brushing our teeth after lunch, and “Touching down” every morning with the Chicken Fat workout. I knew that Mr. Pete was a special teacher. I had fun. Every day. I looked forward to coming to school, and when the year came to an end I knew I had experienced something special.

Fast forward to today. With two young kids of my own and working in the field of education, I understand from a different angle that Mr. Pete was truly one of the most innovative teachers of his time. Not only was he innovative, but he cared. This combination is a unique trait that I personally don’t believe comes along very often.

As Gina mentioned, The Mr. Pete Foundation sprouted out of a bit of brainstorming, but is truly the idea of the namesake himself. He wants to help teachers.

The landscape of education is just as much the same as it is different from 25 years ago. Teachers have brilliant ideas, but the funding isn’t always there for them to carry them out. Even in our own kids’ school we see teachers footing the bill for so much. This shouldn’t have to be the case. We want teachers to do what they do best – use their talents to engage our kids in fun, innovative ways. By taking away the burden of cost, our hope is to inspire teachers to “teach outside the box” and impact kids in the same way that so many were impacted by Mr. Pete.

These past few months have been nothing but inspiring. We hope that we have built something that you will be proud to contribute to, to have fun with, and to benefit from. I am so proud of Gina and the whole Peterson family. It isn’t easy to open up your life to the public in this way. I am so thankful that they have let me in and allowed me to work with them to honor a true hero both in and outside of the classroom.

This is their foundation, but it is also YOUR foundation. Please share your stories, contribute as you can, and stay tuned for SO much more. Thank you for joining us in this journey!